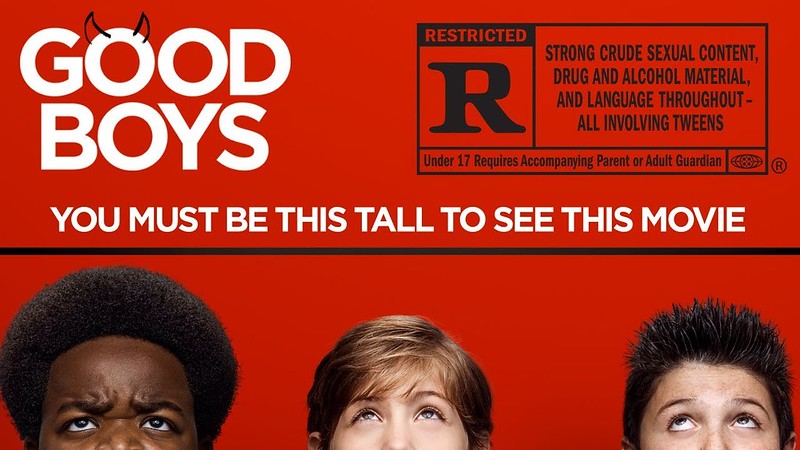 I was home without another human a few days ago and decided to watch Good Boys.  This is a movie about three sixth grade boys who get invited to their first boy-girl party where there is expected to be kissing.  They don’t know how to kiss and decide to learn.  They steal a drone to spy on the neighbor.  She catches their drone and they need to get it back.  It all goes even more wrong from there.  I expected it to be a diverting silly comedy based on the trailer.  I knew a lot of the comedy stemmed from the boys getting into one set of parents’ sex toys and totally misinterpreting what everything is.  I didn’t expect it to be intellectually stimulating, is what I’m saying.

That’s why I was so surprised to realize that this was a delightfully feminist movie.  Women aren’t the main characters.  These kind of movies with a lot of discussions about sex usually have men and boys devaluing and objectifying women at every turn.  That didn’t happen here.  Instead women and girls were treated with respect and dignity in a movie about pubescent boys.  It was amazing.

If you are wondering how that could even happen, here are a few examples.

When they try to spy on the neighbor and her boyfriend, we see her telling her boyfriend that she is going to spend the day with her female best friend.  He responds by asking her to cut the day short and visit him afterwards.  She says that it isn’t her plan and he starts to whine and harass her about it.  Instead of trying to make him feel better, she just says, “You know, this isn’t working out,” and dumps him on the spot!  When he lashes out at her verbally in response she just ignores him and goes back to her friend.  No centering of male feelings at all.  Delightful!

The boys have obviously been deeply schooled in consent.  They don’t see it as anything weird.  They accept it as part of the lead up to kissing.  When they role play to figure out how to kiss on a doll, they remind each other that you can’t just touch someone.  You have to ask first.  It isn’t preachy.  They are just reminding each other of the steps.  See, that wasn’t so hard, was it, whiny internet trolls?

They have also been taught that their consent and comfort matters.  When they get to the kissing party, some decide that they don’t want to participate.  That’s fine with the group.  There are other activities for those who chose not to participate.  No one is shamed for it.

One boy ends up getting a girlfriend.  You then see a montage of the girl breaking up with him, him getting another girlfriend, her breaking up with him, and the two girls going off together.  Yay for showing girls that they can leave relationships and be happy without a boy.  Yay for showing boys it is ok to cry when you get your heart broken.  No need to think your manliness has been crushed forever so you need to become a hateful internet man (or worse).

All of this was shown as such a normal part of the world that I didn’t really even notice all of it until I thought about it later.  Thank you for making a comedy about boys that didn’t have to degrade female feelings and sexuality and relationships in order to be funny. Yes, this is the world that hateful feminists want!

Suffragette: A Movie Experience With The Clueless