The Other Einstein: A Novel

“What secrets may have lurked in the shadows of Albert Einsteinâ€™s fame? His first wife, Mileva â€œMitzaâ€ MariÄ‡, was more than the devoted mother of their three childrenâ€”she was also a brilliant physicist in her own right, and her contributions to the special theory of relativity have been hotly debated for more than a century.
In 1896, the extraordinarily gifted Mileva is the only woman studying physics at an elite school in ZÃ¼rich. There, she falls for charismatic fellow student Albert Einstein, who promises to treat her as an equal in both love and science. But as Albertâ€™s fame grows, so too does Milevaâ€™s worry that her light will be lost in her husbandâ€™s shadow forever.” 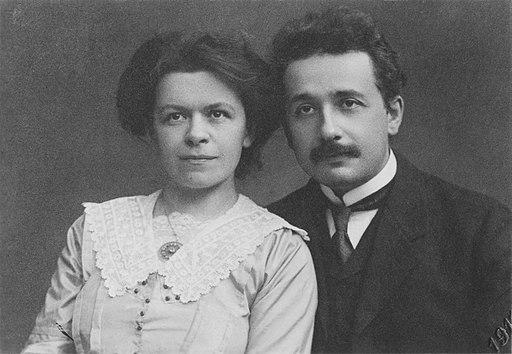 This was one of the books that I was most excited about after BEA. It is a book that seems designed just for me.

So why did I delay reading this until now?

Every time I picked it up I couldn’t quite bring myself to read it.Â  I knew what it was going to be.Â  It is yet another story of a woman who was forced to give up her own ambitions to fit in with the mores of her time.Â  Honestly, the thought exhausted me.

The book is a well written story of the life of Mileva Maric.Â  She was a Serbian woman who attended university in Zurich in physics.Â  She was Einstein’s classmate.Â  She finished her coursework but failed her degree.Â  She had a child with Einstein before they married.Â  That child either died young or was given up for adoption.Â  Nothing is known for sure.Â  After their marriage they had two sons.Â  They divorced when he was having an affair.Â  His mother didn’t like her because Mileva was an inferior dark-skinned Slavic person.Â  (I don’t know.Â  She looks pretty pale to me but I’m Slavic too so Mama Einstein probably wouldn’t have cared for my opinion either.)

It isn’t known if she helped him with his scientific work.Â  There are some letters from him to her where he refers to “our work” but it is earlier in the relationship.Â  This book imagines that she had the idea for relativity and worked on the math.

What follows is a story of erasure.Â  Her name isn’t on the paper because it wouldn’t look good that he needed the help of a woman.Â  He stops asking her for advice.Â  She feels like he sees her as just a housewife.Â  He spends more and more time away and blames her for being selfish if she questions him.Â  He tries to impose a bizarre contract on her in order to keep the marriage together for the sake of the children.

A. You will make sure:

1. that my clothes and laundry are kept in good order;
2. that I will receive my three meals regularly in my room;
3. that my bedroom and study are kept neat, and especially that my desk is left for my use only.

B. You will renounce all personal relations with me insofar as they are not completely necessary for social reasons. Specifically, You will forego:

1. my sitting at home with you;
2. my going out or travelling with you.

C. You will obey the following points in your relations with me:

1. you will not expect any intimacy from me, nor will you reproach me in any way;
2. you will stop talking to me if I request it;
3. you will leave my bedroom or study immediately without protest if I request it.

D. You will undertake not to belittle me in front of our children, either through words or behavior.”Â  Source

This is the part that was hard to read.Â  I wish I was more surprised by it but my feeling as I was reading this was, “Yeah, same ol’ same ol'”Â  This is the story of ambitious women from the beginning of time.

I was thrilled when she was awarded the proceeds of any future Nobel Prize in the divorce settlement.Â  You go girl!Â  She got it too.Â  That’s actual historical fact.Â  Actually she got to live on the interest from it which she invested in rental properties.

I’d recommend this book to any historical fiction fans.