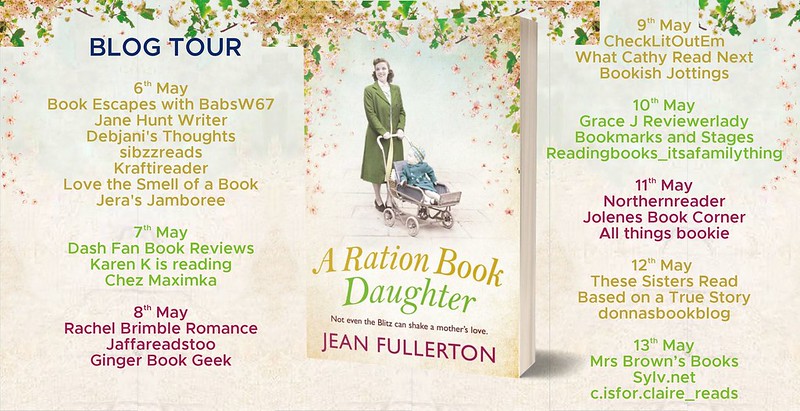 Cathy was a happy, blushing bride when Britain went to war with Germany three years ago. But her youthful dreams were crushed by her violent husband Stanley's involvement with the fascist black-shirts, and even when he's conscripted to fight she knows it's only a brief respite - divorce is not an option. Cathy's only solace is her little son Peter.
When a telegram arrives declaring that her husband is missing in action, Cathy can finally allow herself to hope - she only has to wait 6 months before she is legally a widow and can move on with her life. But in the meantime she has to keep Peter safe and fed. So she advertises for a lodger, and Sergeant Archie McIntosh of the Royal Engineers' Bomb Disposal Squad turns up. Kind, clever and thoughtful, their mutual attraction is instant. But with Stanley's fate still unclear, and the Blitz still raging in London's East End, will Cathy ever have the love she deserves?

This book is part of a series that takes place in the East End of London during World War II. I read this book as a standalone which can be easily done but it is obvious that there were characters in the family whose backstories were explained elsewhere. The text gives you the information that you need to have to read this book alone though.

Cathy was thrilled when her abusive husband went into the Army. She’s left at home with her young son Peter and her mother-in-law. The mother-in-law is just horrible to Cathy for no really good reason other than no one would ever be good enough for her precious son. She also tells everyone that Cathy is rude and nasty to her when that isn’t actually true.

When Cathy’s husband is declared MIA she knows that if he isn’t found in six months she’ll be considered a widow and be free of him. His mother is devastated. This sets up the conflict in the house. I like that Cathy stands up to her mother-in-law in private. She isn’t a doormat.

Archie is a man of Caribbean descent who is part of the bomb squad assigned to London. They defuse bombs that fell on the city but didn’t explode. I had never really considered that there needed to be people for this job. He’s dealing with the racism of the area and an incompetent superior on top of the stress of defusing bombs.

Archie and Cathy are cute. They meet up a few times accidentally before they start seeking each other out. Both of them decide that they want to make a life together regardless of the obstacles and consequences.

This book gives you a good look at the lives of people who are under constant attack from the German bombers. They schedule their time around when they need to get to the bomb shelters. They are trying to make the best lives they can in spite of rationing and never knowing if they are going to lose their house or lives each night. I can’t imagine trying to live through that anxiety.

Nonfiction November – New to the TBR

A New Take on Cake

Wild Women and the Blues