My favorite Olympic sports are the equestrian events.Â  These are the only Olympic events were males and female compete against other.Â  They are the only events where you can reasonable expect have competitors over 60.

The three Olympic equestrian events are:

Horse and rider teams perform a set pattern of maneuvers emphasizing grace, athletic ability, and teamwork. They also perform a ride of their own choreography set to music. 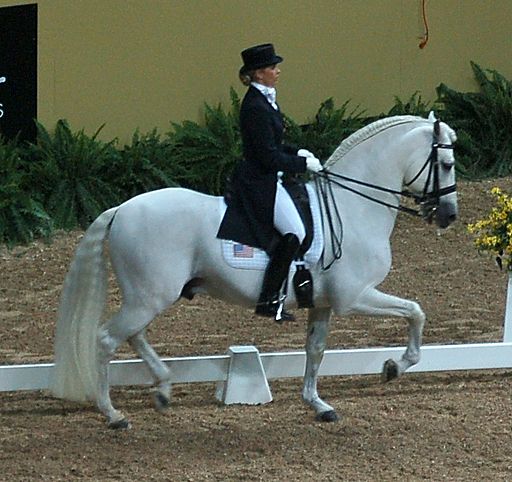 Horse and rider jump a course of obstacles in an arena. The fastest time with the least number of rails knocked down wins. (This photo is actually from the Modern Pentathlon which includes show jumping.) 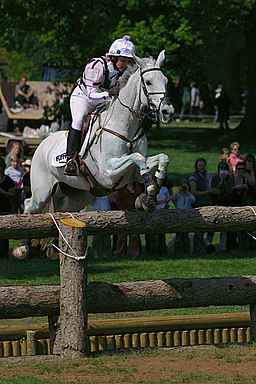 Want to read more about them?

“A young boy named Hans dreams of one day working with the famed stallions of Lipizza. But coming from a family of bakers, Hans is discouraged from ever becoming a rider. That is, until the day he is invited to watch the extraordinary Ballet of Lipizzaners — from the Imperial Box! — and his life is changed forever.”

I am highly skeptical of fiction about horses because so many authors just don’t get it right. But, Marguerite Henry was amazing. She wrote historical horse fiction for kids. I grew up on all her books.

The Perfect Horse: The Daring American Mission to Rescue the Priceless Stallions Kidnapped by the Nazis by Elizabeth Letts

“As the Russians closed in on Hitler from the east and the Allies attacked from the west, American soldiers discovered a secret Nazi effort to engineer a master race of the finest purebred horses. With the support of U.S. general George S. Patton, a passionate equestrian, the Americans planned an audacious mission to kidnap these beautiful animals and smuggle them into safe territoryâ€”assisted by a daring Austrian colonel who was both a former Olympian and a trainer of the famous Lipizzaner stallions.”

I just found out about this one and preordered it. The Lipizzans of the Spanish Riding School in Vienna are national treasures. The mares and foals live on a stud farm in the countryside. The Allies went in and rescued the horses from the Nazis. This was the subject of a Disney movie too.

The Eighty-Dollar Champion: Snowman, the Horse That Inspired a Nation by Elizabeth Letts

“November 1958: the National Horse Show at Madison Square Garden in New York City. Into the rarefied atmosphere of wealth and tradition comes the most unlikely of horsesâ€”a drab white former plow horse named Snowmanâ€”and his rider, Harry de Leyer. They were the longest of all longshotsâ€”and their win was the stuff of legend.”

This is going to be a movie too.

Unrelenting: The Real Story: Horses, Bright Lights and My Pursuit of Excellence by George H. Morris

“A horse lover, rider, carouser, competitor, taskmaster, dreamer, teacher, and visionary, George Morris has been ever-present on the rarified stage of the international riding elite for most of the 70 years heâ€™s been in the saddle. He has represented our country as an athlete and a coach and, at one time or another, instructed many of our nationâ€™s best horsemen and women. His carefully chosen, perfectly enunciated words are notoriously powerful. They can raise you up or cut you to the quick. His approval can be a rainmaker; his derision can end a career.”

Ooooh, this could be good. He’s been chef d’equipe (coach) of the U.S. international teams for a long time. He’s got all the stories.

“A thrilling look at the Olympic sport of show jumping and its superstar horse and rider pairings, including McLain Ward and Sapphire, Ian Millar and Big Ben, Beezie Madden and Authentic, and many more. Utilizing his own experience as an amateur show jumper, Papows brings together personal interviews with the biggest stars, owners, support staff, and caregivers, to give readers an inside look at the personalities behind show jumping. With a foreword by Olympic team coach George Morris, each chapter features a different internationally celebrated horse and rider and their intimate stories of success, struggle, and sacrifice.”

I got to see Millar and Big Ben compete in Canada at the height of their fame. It was absolutely magical. If you aren’t a horse person, trust me. They were HUGE. They have statues of them in Canada. Big Ben got his own stamp.Â  How many human athletes get their own stamp?

“Mark Todd’s eventing career is the stuff of legend and encompasses one of the greatest sporting comebacks of all time. When he ‘retired’ from competing in eventing in 2000, he had already been named ‘Rider of the Century’ for his natural empathy with a horse and his extraordinary success, which included back-to-back Olympic gold medals, five Burghley wins and three Badminton victories. The story of his progress from dairy farmer to world renowned sportsman is told with typically laid-back humor, but it reveals the fierce determination, discipline, and personal sacrifice that lies behind Todd’s calm exterior.”

You have to be flat out insane to be an eventer.Â  Injuries, up to and including death, are common.

Song of the Lioness Series