In 1876 Sophia Duleep Singh was born into Indian royalty. Her father, Maharajah Duleep Singh, was heir to the Kingdom of the Sikhs, one of the greatest empires of the Indian subcontinent, a realm that stretched from the lush Kashmir Valley to the craggy foothills of the Khyber Pass and included the mighty cities of Lahore and Peshawar. It was a territory irresistible to the British, who plundered everything, including the fabled Koh-I-Noor diamond.
Exiled to England, the dispossessed Maharajah transformed his estate at Elveden in Suffolk into a Moghul palace, its grounds stocked with leopards, monkeys and exotic birds. Sophia, god-daughter of Queen Victoria, was raised a genteel aristocratic Englishwoman: presented at court, afforded grace and favor lodgings at Hampton Court Palace and photographed wearing the latest fashions for the society pages. But when, in secret defiance of the British government, she travelled to India, she returned a revolutionary.
Sophia transcended her heritage to devote herself to battling injustice and inequality, a far cry from the life to which she was born. Her causes were the struggle for Indian Independence, the fate of the lascars, the welfare of Indian soldiers in the First World War â€“ and, above all, the fight for female suffrage.

Ranjit Singh was the last ruling emperor of the Punjab. 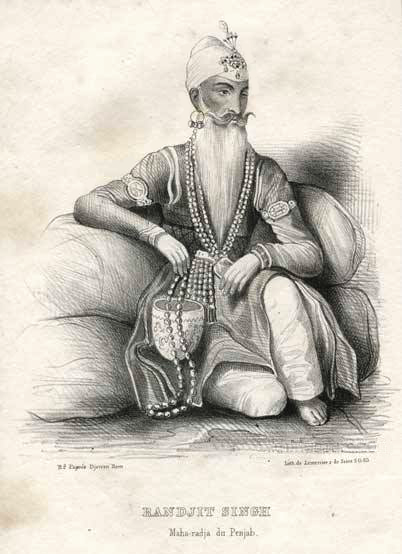 After his death, the British used the confusion surrounding his heirs’ succession to move into the area. Most of the adult heirs died suspiciously. When it was over, the ruler of this prosperous area was an 1o year old boy, Duleep. His mother was very politically astute so the British had her exiled from the country and then forced the child-king to sign over his lands and the symbol of his rule, the Kor-i-Noor diamond.

Duleep Singh was then raised by British people until Queen Victoria decided that he was really cute and wanted him to go to England. She lavished attention on him and considered herself to be his best friend. He was not reunited with his mother until he was an adult.

Eventually Duleep married a woman from Egypt and had six children. The children were known as Princes and Princesses. Princess Sophia was his youngest surviving child from this marriage. Arrangements were made with the India office to provide for the family because they did not want them going back to India and stirring up trouble.

Sophia grew up in luxury until her father’s debts became too much.Â  He then tried to return to India with the family but was taken off the ship at the Suez Canal.Â  The family was sent back to England but Duleep Singh did not go with them.Â  Instead he publicly disowned them and started another family while trying to get back to India.Â  He never did.

Sophia and her sisters were able to get to India as adults. The experience of meeting people fighting for Indian independence awoke the political consciousness of Sophia. She returned to England and threw herself into the fight of Women’s Suffrage in the 1910s. 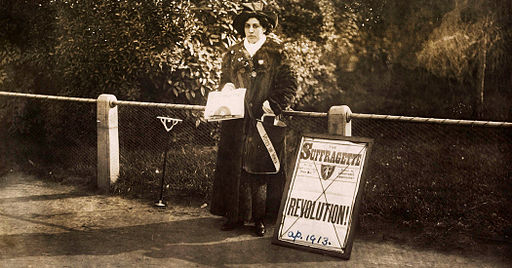 I love this picture. Sophia lived across the street from the gates of Hampton Court Palace in a grace-and-favor house. That meant that she was allowed to live there as a favor from the monarch. She protested in front of the tourists coming to Hampton Court and sold suffragette newspapers to them. Despite being involved in many of the major protests of the era and even attacking politicians, she was never sent to prison like her fellow suffragettes.Â  She even refused to pay any taxes in an attempt to get arrested.Â  The spectacle of putting a Princess in prison was too much for law enforcement.

World War I curtailed the suffragette movement.Â  She became a nurse for Indian soldiers brought back to England for rest.

While I was reading this book, the Indian solicitor-general came out and said that India should not try to get the Kor-i-Noor diamond back and said it was “neither stolen nor forcibly taken”. It was a present.Â  Yeah, because a 10 year old with no friendly adult counsel can make those kinds of gifts.

The Kor-i-noor is the diamond in the center of the front cross on this crown.Â  This is what reading nonfiction gets you.Â  It gets you yelling at the news in an very angry, yet informed, way.

The part of the book I found the most touching was a memory of the daughter of the elderly Princess’ housekeeper.

“We’d be walking, and she’d be telling me about the world and elections and how important they were.Â  And then she would kneel down in front of me, looking me right in the eye and say ‘I want a solemn promise from you’ even though I don’t think I knew what a solemn promise was at that stage.Â  She would say ‘You are never, ever not to vote.Â  You must promise me.Â  When you are allowed to vote you are never, ever to fail to do so.Â  You don’t realise how far we’ve come.Â  Promise me.’ For the next three years, Sophia made Drovna promise again and again.”

Drovna has kept her promise to the woman who fought hard to win the right for English women to vote.

5 Replies to “How Do You Solve a Problem Like Sophia?”