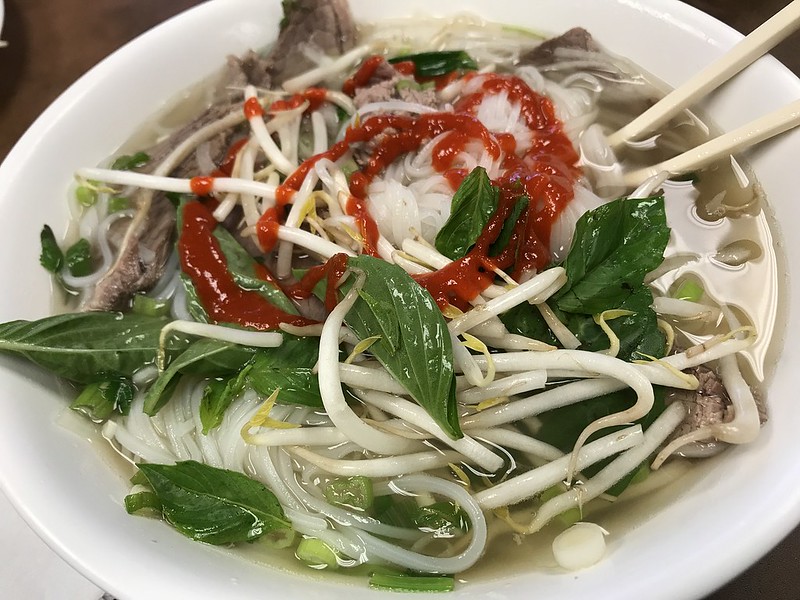 If Bao Nguyen had to describe himself, he’d say he was a rock. Steady and strong, but not particularly interesting. His grades are average, his social status unremarkable. He works at his parents’ pho restaurant, and even there, he is his parents’ fifth favorite employee. Not ideal.
If Linh Mai had to describe herself, she’d say she was a firecracker. Stable when unlit, but full of potential for joy and fire. She loves art and dreams pursuing a career in it. The only problem? Her parents rely on her in ways they’re not willing to admit, including working practically full-time at her family’s pho restaurant.
For years, the Mais and the Nguyens have been at odds, having owned competing, neighboring pho restaurants. Bao and Linh, who’ve avoided each other for most of their lives, both suspect that the feud stems from feelings much deeper than friendly competition.
But then a chance encounter brings Linh and Bao in the same vicinity despite their best efforts and sparks fly, leading them both to wonder what took so long for them to connect. But then, of course, they immediately remember.
Can Linh and Bao find love in the midst of feuding families and complicated histories?

I knew I had to read this book as soon as I heard about it. A foodie YA contemporary love story? Yes, please.

Bao and Linh have been kept apart ever since they were children even though they spend most of their time across the street from each other at competing pho restaurants. Each family knows that the other are terrible cooks as well as being sneaky and underhanded too. Neither Bao or Linh have any idea how their parents know this about each other. It is just understood.

When Bao and Linh meet again, they bond over their shared experiences growing up with immigrant families in the restaurant business. While comparing stories they realize that there may be something more between their families than just being rival business owners.

This book looks into the results of the trauma of the Vietnam War on families who had to flee the fighting. How did this affect their relationships with the people they left in Vietnam? Linh’s mother has a low opinion of her sister’s art career because at the time she left Vietnam her sister couldn’t make a living. In modern day Vietnam she has a thriving career and that doesn’t fit into the vision of Vietnam that Linh’s mother has. Both sets of parents are determined to keep their previous experiences during the war in the past while the children want to understand their family history.

One thing that really annoys me in books is when non-English words are italicized. This book has a lot of the dialogue in Vietnamese and everything is italicized. However, the Vietnamese is not always translated. I do like that in a story. Let the reader get the meaning from the context instead of laboriously explaining everything that is said.

Overall, this is a cute Romeo and Juliet-type story in a setting that I haven’t seen often in books.

This Is My America