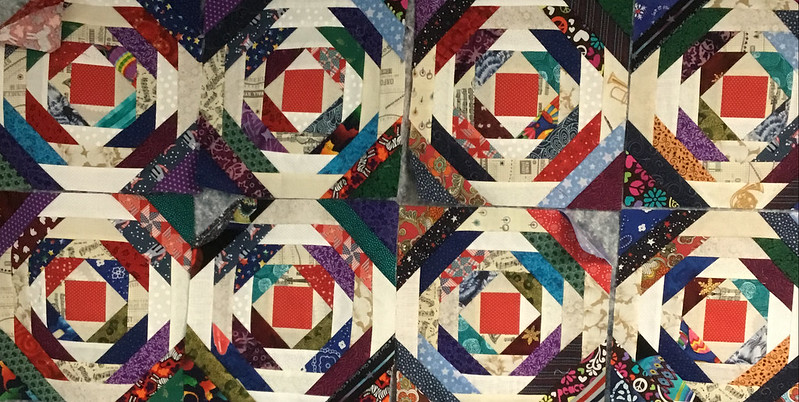 True confession time.  I didn’t finish the whole post last time before it autoposted in January.  I meant to list all the WIPs (Works in Progress) that I want to work on this year and then show if there is any progress in each one.

This is a new project.  I figured I could handle one beginner block each month and actually end up with a quilt for someone.  The second block was a simple one to be done in pink.

The word fabric was left over from a baby quilt for a kid who is about 6 or 7 now.

I found out recently that a few people I work with don’t like polka dots.  They find them creepy.  They are obviously wrong.  I love polka dots.  I have a lot of dot fabrics at home.

This was 2017 (shut up) mystery quilt from Bonnie Hunter.  I did really well making all my pieces on the weekly schedule.  There are hundreds and hundreds of pieces.  And then it sat.  I had an unexpected day off work during the super cold spell so I decided to spend it sewing.  I went downstairs meaning to work on something else but I saw this and decided to work on it instead.

By the end of the first day I had turned this:

Typical behavior for me would then be to wander off never to work on this again for months. But that didn’t happen! I came back the next day and worked on it again. I ordered a backing for it even.

Powder used to lay right by the sewing machine and I always told her that it was a miracle that she never got her tail sewn. She never really got close though. This was my first time sewing with the Lucy-kitten. She decided that she could catch the moving machine needle between her front paws. I screamed, “Noooooooooooooo!” at her so loud that she went off and pouted because I scared her. Better hurt feelings than sewn together paws.

I’ve even kept going.  I’ve decided to quilt this in a simple all over pattern.  I’m going to quilt this in sections using a Quilt as You Go technique.  I’ve ordered the stencil and received the backing fabric.  Here is the first section put together.

Look what that kitten did to my high class design wall!

This is destined to hang above the daybed in my cat/music room/library. The whole room was painted to show it off. Now I just need to finish it. It is fusible applique and quilt-as-you go. This is what I meant to work on when I got restarted on On Ringo Lake.

This is the third panel. This is fusible applique that is then sewed down/quilted in one step. I finished quilting the second swan so this panel is done. Now I need to start tracing panel four.

Blogging from A to Z – F

Blogging from A to Z – D