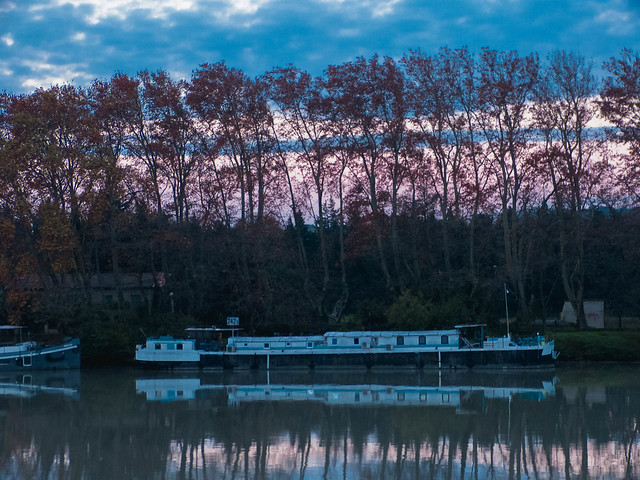 Yes, I did go to France all the way back in November and never even blogged about it.  I’m such a blogger failure.  So here is the start of the story…

We flew into Marseilles and were driven on a bus to Avignon to meet our river cruise boat.  We were told that our trip was going to take a bit longer than normal.  They said there was a problem on the road.  Turns out that the Yellow Jackets were out.  This is a group in France who are protesting new gasoline taxes.  They do things like shut down roads or intersections.  We saw them in action (or their effects) a few times on the trip.

Avignon is a really cool place.  All I remembered about it when I heard we were going there was that it was the seat of the anti-Popes.  I did read a book in preparation for the trip that helped a lot with the historic background of the town.  Basically, in the 1300s Rome was a hot mess and the Pope was getting death threats and kidnapped and all sorts of nonsense.

His main supporter was the King of France.  At this time the town of Avignon was part of a territory known as the Papal Free State, which belonged to the Pope. It was located on the banks of the Rhone River which isn’t very wide and there was also a bridge here. On the other side was French territory. The Pope came here because it was safer. For about the next hundred years, the papacy was located in Avignon. It was a boom town because the Pope doesn’t come to town alone. After one of the Popes decided to move back to Rome, there was a contingent who considered him a traitor and installed their own Popes in Avignon. Those were the anti-Popes.

We got to Avignon in the afternoon and crashed. I know you aren’t supposed to do that and the city was literally RIGHT THERE outside our window but we had been travelling for about 18 hours at that point. Even I couldn’t muster up the energy to go exploring right then. We recuperated overnight and then hit the city the next morning.

We started with a guided tour. I was worried about this. I’ve never wanted to be part of a large group following a guide around like little ducklings. Now here we were doing just that. It was ok though. We had headsets so we could hear the guide without having to stay right on her heels.

We made our way through the city walls. Thank you 18th century people who decided not to tear them all down. You go through the walls into an alley that they opens into the town.

We started at The Pope’s Palace which is a huge structure. It served the same purpose as the Vatican during the Pope’s time here. It was actually a disappointment for me after all my reading up on the subject. There was a fire here long after the Popes left that left the interior mostly just stone walls. What you see now is big cavernous spaces that are described as previously ornate. I know it is Avignon’s Big Thing but I’d read about it and skip the visit.

We did really enjoy a garden that we found by chance on a cliff overlooking the Rhone. Even in November, it was beautiful.

Avignon has a bridge. The bridge is important. This was built in the 12th century and was the only bridge across the Rhone anywhere near. It was part of a pilgrimage route from Italy to Spain. It washed mostly away a long time ago.

It even has its own song. That is obvious to French people. Everything written about this bridge tosses in “from the song” like it is self-evident what song you are referring to. I am an ignorant American. I had to Google. There is a French children’s song about dancing on the bridge. It seems to occupy the same mindspace in French people where “Row, Row, Row Your Boat” lives in English-speaking brains. Everyone just knows it. No one can remember actually learning it. French guides tried so gamely. “The bridge is just down there. You know, from the song?” Blank stares from 20 Americans. French guide bursts into “Sur la pont d’Avignon” with the bouncy rhythm and embarrassment of an adult singing a children’s song alone in front of a group of people who have never heard of it.

The husband and I wandered around most of the town.  It isn’t a huge place so you can get a good feel of it in a few days.  Of course we stopped at chocolate shops for a snack.

We rode a carousel because you should never pass up a chance to do that even if your husband is going to start yelling, “Wheeeeee” as he goes around and will be waving to French people who are just trying to live their lives.

Meet the coolest cat in Avignon.  This guy was playing music on the edge of a busy intersection while this cat just lounged.  He didn’t even care.

Cruising in an Age of COVID

Blogging from A to Z – I