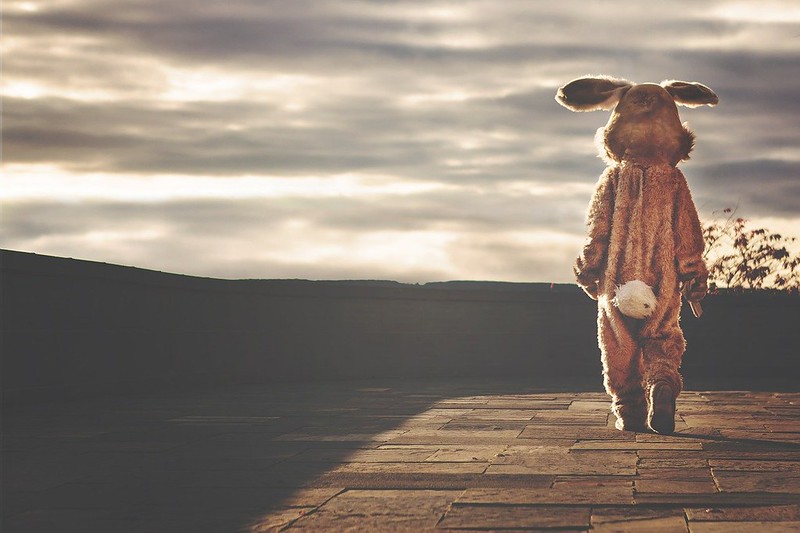 Peter Knox lives quietly in one of those small country villages that's up for the Village Garden of the Year award. Until Doc and Constance Rabbit move in next door, upsetting the locals (many of them members of governing political party United Kingdom Against Rabbit Population), complicating Peter's job as a Rabbit Spotter, and forcing him to take a stand, moving from unconscious leporiphobe to active supporter of the UK's amiable and peaceful population of anthropomorphised rabbits.

I just read Jasper Fforde books. He writes them, I pick them up, and I read them. I don’t even read the synopsis. That has never served me so well as it did here. I was overjoyed when a book that starts with synchronized volunteer speed-librarying ends up introducing anthropomorphized rabbits into the mix.

Turns out that in the 1960s in England there was an incident. For some reason a few rabbits turned human sized and able to talk. They are also smarter than humans. Humans for the most part didn’t like this.

This book is a satire of British politics. Take any outsider group in England – Muslim/Polish/Immigrant/Foreigner – and substitute in Giant Rabbit instead. It really points out the absurdity of right wing ideas.

‘Them,’ she added, no more helpfully.

‘No, not vegans,’ she said, eyes opening wide, ‘worse than that.’

‘Foreigners?’ I asked, catching sight of that morning’s copy of The Actual Truth, whose leader column’s outrage du jour was that unwashed foreign beggars were taking much-needed panhandling jobs from their hard-working British counterparts.

I’m a horrible liberal borderline-vegan person so I found this laugh out loud funny. I was reading the ebook and I have highlighted 23 huge sections.

“It wasn’t just foreigners or rabbits, either: they had an intense dislike for those whom they described as ‘spongers’ – again, a net that could be cast quite broadly but conveniently excluded those on a government pension, taken early – and other groups that they felt were deeply suspect, such as VW Passat drivers: ‘the car of smug lefties’. Added to that was anyone who was vegetarian, or wore sandals, or men with ‘overly vanitised’ facial hair – or women who wore dungarees, spoke loudly and had the outrageous temerity to suggest that their views might be relevant, or worse, correct.”

I feel like the story went on a bit too long to sustain the metaphor but I enjoyed the heck out of this book anyway. I absolutely want to live in the world that the rabbits were trying to build.

‘Does vegan stew stir you somewhat in the nether regions, Peter?’ asked Doc. ‘It does us. Big time.’

A Wizard’s Guide to Defensive Baking

Barnabas Tew and the Case of the Enlightened Cow