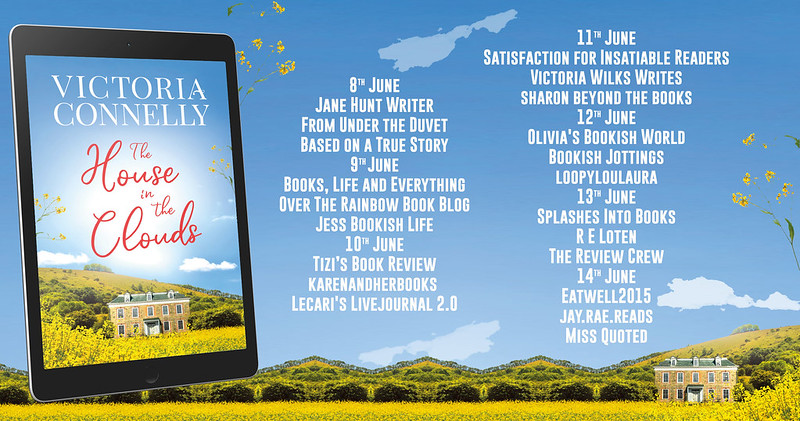 The House in the Clouds on June 8, 2021
Format: eARC
Buy on Amazon (affiliate link)
Setting: England

Artist Abigail Carey has always dreamed of a life in the country and, when Winfield Hall comes up at auction, she’s desperate to make the place her home. The only trouble is that businessman, Edward Townsend, has exactly the same idea.

With its position high on the Sussex Downs, Winfield is a stunning house, but it hasn’t been a home for a long time and there’s a lot of work to do to restore it to its former glory. It’s going to take a lot of time and money, so Edward and Abi decide to take a risk and share the house, each living in their own wing.

But can these two strangers agree on a vision that suits them both? And will free-spirited Abi ever get the rather reserved Edward to reveal the secret he’s been hiding for so long?

The House in the Clouds is the first novel in a brand new trilogy from the bestselling author of The Rose Girls and The Book Lovers series.

I absolutely loved this book. Two strangers bid on a huge mansion in the English countryside. Several months later, once he realizes how much it is going to cost him to repair this house and just after finding out that he’s lost his job, the winning bidder reaches out to the underbidder to suggest a deal. They will split the house and grounds. Each is free to do what they want with their portion of the estate.

Edward and Abigail couldn’t be more different. He is in finance and likes things to be neat and tidy. She’s an artist who parlayed some doodles into a hugely successful housewares company. She’s just sold her company and isn’t sure what she is going to do next. They are both drawn to the house though. They are also both dealing with some unresolved family trauma.

This is the first book in a planned trilogy so not a lot is resolved at the end of this book. This book seems to be setting up the obstacles that are going to be faced in the future books. I would still recommend it though. It was quite an enjoyable read for a summer’s day. I’m looking forward to seeing what comes next.

Victoria Connelly lives in a 500-year old thatched cottage in rural Suffolk with her artist husband, a springer spaniel and a flock of ex-battery hens. She is the million-selling author of two bestselling series, The Austen Addicts and The Book Lovers, as well as many other novels and novellas. Her first published novel, Flights of Angels, was made into a film in Germany. Victoria loves books, films, walking, historic buildings and animals. If she isn’t at her keyboard writing, she can usually be found in her garden either with a trowel in her hand or a hen on her lap.