What if Time Travel were real? What if Time Travelers from 300 years in the future told you that there was a chance that you could prevent catastrophic climate change, plagues, and wars by going back in time to key Pivot Points and ethically altering the outcome of rigged elections? What if failure would result in the destruction of the biosphere? Would you go?

In post-plague 2050 Britain, palm trees tower over the rice paddies of Stonehenge. Tara MacFarlane, a weary 96-year-old anthropologist originally from Taos, New Mexico, longs only to finish out her life in peaceful Buddhist meditation, and rejoin the great love of her later years, the humanitarian Scottish-Afghan doctor Xander, in a future incarnation. Suddenly one stifling autumn day Tara, her great-granddaughter Leona, and Leonaâ€™s boyfriend Janus are faced with a trio of Time Travelers from a future alternate Timeline where humanity and the eco-system survived and thrived.

The fate of Earthâ€™s biosphere falls squarely on the shoulders of Tara, Leona, Janus, and Taraâ€™s small gray cat, Georgie, who shows a surprising aptitude for telepathy. Time is short to reverse catastrophe that will bleed through into the alternate Timeline, and the Time Travelers must first determine the ideal Pivot Points by reading Time Code vibrations off the great standing stones of Avebury. Unexpectedly joined by the brave and wise cat Georgie, the six plunge into the Time Circle of Stonehenge on their mission. Where and when will they go, and will they succeed in restoring the Earth and humanity to balance?

There is a lot going on in this book.Â  The Earth has lost most of its population due to plagues and climate change.Â  A group of humans living in the now-tropical area of Stonehenge are suddenly visited by people claiming to be from the future.

The story is told in flashbacks and in the current timeline to show how humans managed to destroy the planet in such a short period of time.Â  The main characters are Buddhists who have invested a lot of their lives into meditation and spiritual practice.Â  They apply what they have learned through that to help try to heal the planet.Â  A lot of this isn’t explained in much detail, if at all.Â  The visitors from the future have a lot of special powers that they are unable to explain.Â  They explain it as using readily available technology in their world but it can come across as sort of lazy story telling like, “Oh, look, she can project holograms of different timelines from her head.Â  How, you ask?Â  Um, technology…”Â Â

The group needs to go back to key points in history to change things.Â  (They basically need to prevent the 1980s.)Â

There is a cat who plays a vital part in the story and is able to speak mind to mind with his people.Â  He is known forever as Georgie, the first Time Traveling cat.Â  I approve of cats with good communication skills.Â

This book reminds me so much of The Fifth Sacred Thing by Starhawk. Â Both books feature a very elderly woman as the main protagonist.Â  She joins forces with her chosen family to prevent a disaster through spiritual/magical means.Â Â 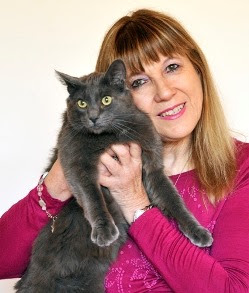 Debra Denker has been writing stories since she learned to read. Although novels and poetry were her first loves, she turned her talent to journalism in the â€˜70s and â€˜80s, writing about Afghanistan and the refugee situation in Pakistan for National Geographic and many leading newspapers. She has specialized in social documentation utilizing journalism, photography, and film to convey the experiences of people in war torn areas, with the intention of stimulating the empathy necessary for humans to stop violence against people and planet.

Denker is the author of two published books, the non-fiction literary memoir Sisters on the Bridge of Fire: One Womanâ€™s Journeys in Afghanistan, Pakistan, and India, and the novel War in the Land of Cainâ€”a story of love, war, and moral choices set during the Soviet-Afghan war of the 1980â€™s.

She currently lives in Santa Fe with her family of cats, Dorjee Purr-ba, Yeshe Gyalpo, and Samadhi Timewalker, but travels frequently in earthly space, and hopes to travel in time and galactic space.

Her personal blogÂ www.mysticresistance.comÂ explores a range of spiritual, social, and political issues and their intersection with sacred activism.

Monday, February 4
Review atÂ Based on a True Story

Tuesday, February 5
Interview atÂ Passages to the Past

During the Blog Tour we will be giving away two paperback copies of Weather Menders! To enter, please use the Gleam form below.

â€“ Giveaway ends at 11:59pm EST on February 15th. You must be 18 or older to enter.
â€“ Giveaway is open to US/UK/CANADA.
â€“ Only one entry per household.
â€“ All giveaway entrants agree to be honest and not cheat the systems; any suspect of fraud is decided upon by blog/site owner and the sponsor, and entrants may be disqualified at our discretion.
â€“ Winner has 48 hours to claim prize or new winner is chosen.