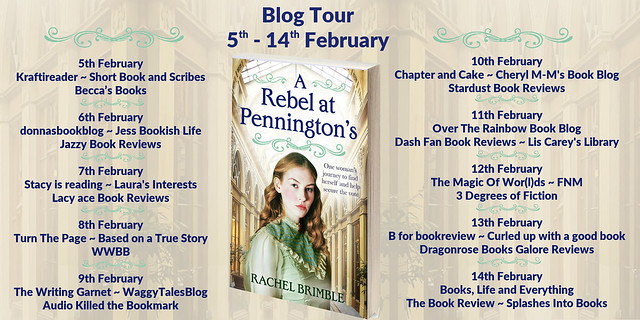 One woman's journey to find herself and help secure the vote. Perfect for the fans of the TV series Mr Selfridge and The Paradise.

1911 Bath. Banished from her ancestral home, passionate suffrage campaigner, Esther Stanbury works as a window dresser in Pennington's Department Store. She has hopes and dreams for women's progression and will do anything to help secure the vote. Owner of the prestigious Phoenix Hotel, Lawrence Culford has what most would view as a successful life. But Lawrence is harbouring shame, resentment and an anger that threatens his future happiness.

When Esther and Lawrence meet their mutual understanding of life's challenges unites them and they are drawn to the possibility of a life of love that neither thought existed. With the Coronation of King-Emperor George V looming, the atmosphere in Bath is building to fever pitch, as is the suffragists' determination to secure the vote.

Will Esther's rebellious nature lead her to ruin or can they overcome their pasts and look to build a future together?

This is the second book in an historical fiction series about a department store in Bath in the early 1900s.  The story from the first book continues in the background of this book so while it may not be absolutely necessary to read them in order, it will add to your understanding.

Esther is a young woman who is focusing on her career and her political activism.  She feels strongly that she is going to be unable to do this and have a marriage because she can’t conceive of a marriage where her activities would be well tolerated, let alone encouraged.  She meets a widower with two young children who has his own hang ups about introducing a new woman in his life.  How do these two stubborn and emotionally damaged people work out their issues?

I am enjoying this series.  It is interesting to see what is considered the height of modernity at this time period.  This book especially deals with the fallout of the suffrage movement in England which became much more violent than it did in the United States.  How did people choose how to align themselves?  How did it affect businesses?

This is a great book for people who love historical fiction because it covers a lot on the suffrage movement as well as the excitement over the coronation of a new King.

*Terms and Conditions –Worldwide entries welcome.  Please enter using the Rafflecopter box below.  The winner will be selected at random via Rafflecopter from all valid entries and will be notified by Twitter and/or email. If no response is received within 7 days then I reserve the right to select an alternative winner. Open to all entrants aged 18 or over.  Any personal data given as part of the competition entry is used for this purpose only and will not be shared with third parties, with the exception of the winners’ information. This will passed to the giveaway organiser and used only for fulfilment of the prize, after which time I will delete the data.  I am not responsible for despatch or delivery of the prize.
a Rafflecopter giveaway

Author Bio – Rachel lives with her husband and their two daughters in a small town near Bath in the UK. Since 2007, she has had several novels published by small US presses, eight books published by Harlequin Superromance (Templeton Cove Stories) and four Victorian romances with eKensington/Lyrical.
In January 2018, she signed a four-book deal with Aria Fiction for a new Edwardian series set in Bath’s finest department store. The first book, The Mistress of Pennington’s released July 2018.
Rachel is a member of the Romantic Novelists Association and Romance Writers of America, and was selected to mentor the Superromance finalist of So You Think You Can Write 2014 contest. When she isn’t writing, you’ll find Rachel with her head in a book or walking the beautiful English countryside with her family. Her dream place to live is Bourton-on-the-Water in South West England.
She likes nothing more than connecting and chatting with her readers and fellow romance writers. Rachel would love to hear from you!