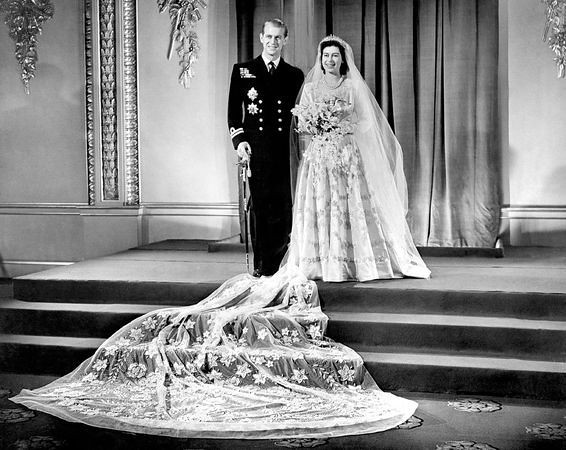 From the internationally bestselling author of Somewhere in France comes an enthralling historical novel about one of the most famous wedding dresses of the twentieth century—Queen Elizabeth’s wedding gown—and the fascinating women who made it.

“Millions will welcome this joyous event as a flash of color on the long road we have to travel.”—Sir Winston Churchill on the news of Princess Elizabeth’s forthcoming wedding

London, 1947: Besieged by the harshest winter in living memory, burdened by onerous shortages and rationing, the people of postwar Britain are enduring lives of quiet desperation despite their nation’s recent victory. Among them are Ann Hughes and Miriam Dassin, embroiderers at the famed Mayfair fashion house of Norman Hartnell. Together they forge an unlikely friendship, but their nascent hopes for a brighter future are tested when they are chosen for a once-in-a-lifetime honor: taking part in the creation of Princess Elizabeth’s wedding gown.

Toronto, 2016: More than half a century later, Heather Mackenzie seeks to unravel the mystery of a set of embroidered flowers, a legacy from her late grandmother. How did her beloved Nan, a woman who never spoke of her old life in Britain, come to possess the priceless embroideries that so closely resemble the motifs on the stunning gown worn by Queen Elizabeth II at her wedding almost seventy years before? And what was her Nan’s connection to the celebrated textile artist and holocaust survivor Miriam Dassin?

With The Gown, Jennifer Robson takes us inside the workrooms where one of the most famous wedding gowns in history was created. Balancing behind-the-scenes details with a sweeping portrait of a society left reeling by the calamitous costs of victory, she introduces readers to three unforgettable heroines, their points of view alternating and intersecting throughout its pages, whose lives are woven together by the pain of survival, the bonds of friendship, and the redemptive power of love.

I love historical fiction that pulls you in from the beginning. This is the story of two women from very different backgrounds who meet in the embroidery workshop of a dress designer in London immediately after World War II.

Ann is English. She lost her parents before the war and her brother during the Blitz.  She lives with her sister-in-law, trying to scrape by.

Miriam is a French Jew who was in a concentration camp for part of the war.  No one in England knows about this part of her life.  All they know is that she is a skilled embroiderer who worked in a design house in Paris.

Fast forward to 2016 and a woman in Toronto gets a box of pictures and embroidery from her recently deceased grandmother.  She knew her grandmother was from England but she never talked about her life there.  She also didn’t know how to sew as far as her granddaughter knew.  Why does she have all this?

This is a great story of female friendship and support.  It also shows you the amazing amount of handwork that goes into couture dresses.  I like stories based on unknown women who have had a part, however small, in historical events.

I had never really looked at the dress before.  It is so detailed with both embroidery and applique.  I can’t imagine doing that day in and day out.  (I hurt my hands just trying to hand sew one quilt.)  They only had a few weeks to get that all finished.  It is amazing.

Jennifer Robson is the USA Today and #1 Toronto Globe & Mail bestselling author of Somewhere in France, After the War is Over and Moonlight Over Paris. She holds a doctorate from Saint Antony’s College, University of Oxford. She lives in Toronto with her husband and young children.

Friday, January 4th: Into the Hall of Books

Tuesday, January 15th: Based on a True Story

Friday, January 25th: As I turn the pages