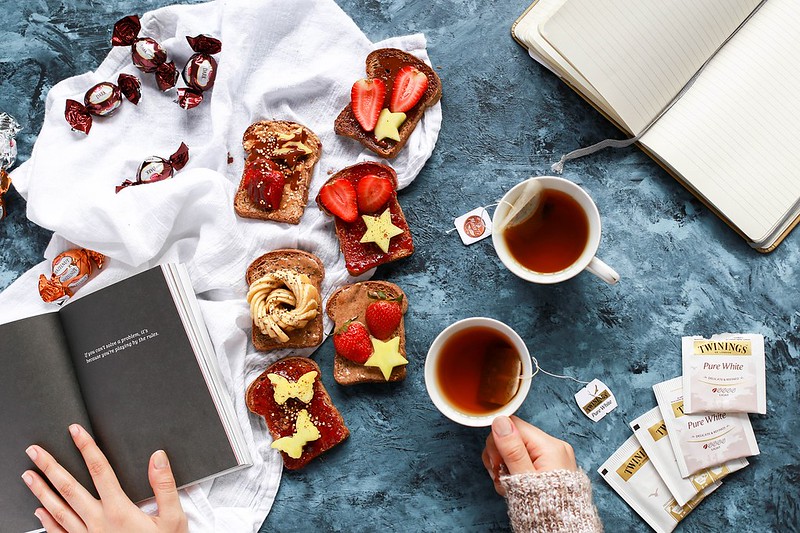 Some of my favorite fantasy novels involve the combination of magic and food. In honor of Wyrd & Wonder month I’d thought I’d make a list of some great magical stories involving food that I’ve read in the past year.

“In a small back alley in Tokyo, there is a café which has been serving carefully brewed coffee for more than one hundred years. But this coffee shop offers its customers a unique experience: the chance to travel back in time.”

“Amber Sand is not a witch. The Sand family Wicca gene somehow leapfrogged over her. But she did get one highly specific magical talent: she can see true love. As a matchmaker, Amber’s pretty far down the sorcery food chain (even birthday party magicians rank higher), but after five seconds of eye contact, she can envision anyone’s soul mate.

Amber works at her mother’s magic shop–Windy City Magic–in downtown Chicago, and she’s confident she’s seen every kind of happy ending there is: except for one–her own. (The Fates are tricky jerks that way.) So when Charlie Blitzman, the mayor’s son and most-desired boy in school, comes to her for help finding his father’s missing girlfriend, she’s distressed to find herself falling for him. Because while she can’t see her own match, she can see his–and it’s not Amber. How can she, an honest peddler of true love, pursue a boy she knows full well isn’t her match?”

This doesn’t sound immediately foodie but Amber’s way of coping with stress is to bake. She wants to go to culinary school and she gets a job in a restaurant that caters to magical creatures.

“For her sixth birthday, Fiona Campbell’s mother, Claire, made her a peace sign piñata filled with wishes for a better planet instead of candy. When she got her period, her mother held a womanhood ceremony at their café and invited the neighborhood. On her sixteenth birthday, they celebrated with a drum circle.

Fiona grew up trying to keep the impulsive Claire in check, and their struggling café afloat. She plans to move out, but first must find a way to stop a big corporation from tearing down their business and destroying her mother’s livelihood.

Claire thinks karma will solve their financial and legal problems. Fiona prefers a spreadsheet and a solid business plan. The last thing she has time for is Matthew Monroe, a handsome complication who walks through their door with a guitar on his back and a naughty gleam in his eye. But when disaster strikes, and Fiona’s forced to turn to him for help, will she learn to open her heart and find she can believe in something magical after all?”

“Leonora Logroño’s family owns the most beloved bakery in Rose Hill, Texas, spending their days conjuring delicious cookies and cakes for any occasion. And no occasion is more important than the annual Dia de los Muertos festival.

Leo hopes that this might be the year that she gets to help prepare for the big celebration—but, once again, she is told she’s too young. Sneaking out of school and down to the bakery, she discovers that her mother, aunt, and four older sisters have in fact been keeping a big secret: they’re brujas—witches of Mexican ancestry—who pour a little bit of sweet magic into everything that they bake.”

“Wren knew her sweet treats could work wonders, but she never knew they could work magic. She barely has time to wrap her head around the stunning revelation when the head of the prestigious Confectioner’s Guild falls down dead before her. Poisoned by her cupcake.

Now facing murder charges in a magical world she doesn’t understand, Wren must discover who framed her or face the headsman’s axe. With the help of a handsome inspector and several new friends, Wren just might manage to learn the ropes, master her new powers, and find out who framed her. But when their search for clues leads to a deep-rooted conspiracy that goes all the way to the top, she realizes that the guild master isn’t the only one at risk of death by chocolate.”

“Ever since she can remember, Vanessa Yu has been able to see people’s fortunes at the bottom of their teacups. To avoid blurting out their fortunes, she converts to coffee, but somehow fortunes escape and find a way to complicate her life and the ones of those around her. To add to this plight, her romance life is so nonexistent that her parents enlist the services of a matchmaking expert from Shanghai.

The day before her matchmaking appointment, Vanessa accidentally sees her own fate: death by traffic accident. She decides that she can’t truly live until she can find a way to get rid of her uncanny abilities. When her eccentric aunt, Evelyn, shows up with a tempting offer to whisk her away, Vanessa says au revoir to America and bonjour to Paris. While working at Evelyn’s tea stall at a Parisian antique market, Vanessa performs some matchmaking of her own, attempting to help reconnect her aunt with a lost love. As she learns more about herself and the root of her gifts, she realizes one thing to be true: knowing one’s destiny isn’t a curse, but being unable to change it is.”

“At the news of her mother’s death, Natalie Tan returns home. The two women hadn’t spoken since Natalie left in anger seven years ago, when her mother refused to support her chosen career as a chef. Natalie is shocked to discover the vibrant neighborhood of San Francisco’s Chinatown that she remembers from her childhood is fading, with businesses failing and families moving out. She’s even more surprised to learn she has inherited her grandmother’s restaurant.

The neighborhood seer reads the restaurant’s fortune in the leaves: Natalie must cook three recipes from her grandmother’s cookbook to aid her struggling neighbors before the restaurant will succeed. Unfortunately, Natalie has no desire to help them try to turn things around–she resents the local shopkeepers for leaving her alone to take care of her agoraphobic mother when she was growing up. But with the support of a surprising new friend and a budding romance, Natalie starts to realize that maybe her neighbors really have been there for her all along.”

“Fourteen-year-old Mona isn’t like the wizards charged with defending the city. She can’t control lightning or speak to water. Her familiar is a sourdough starter and her magic only works on bread. She has a comfortable life in her aunt’s bakery making gingerbread men dance.

But Mona’s life is turned upside down when she finds a dead body on the bakery floor. An assassin is stalking the streets of Mona’s city, preying on magic folk, and it appears that Mona is his next target. And in an embattled city suddenly bereft of wizards, the assassin may be the least of Mona’s worries…

“When Zoe Faust–herbalist, alchemist, and recent transplant to Portland, Oregon–begins unpacking her bags, she can’t help but notice she’s picked up a stow away: a living, breathing, three-and-half-foot gargoyle. Dorian Robert-Houdin is no simple automaton, nor is he a homunculus; in fact, he needs Zoe’s help to decipher a centuries-old text that explains exactly what he is. Zoe, who’s trying to put her alchemical life behind her, isn’t so sure she can help. But after a murder victim is discovered on her front porch, Zoe realized she’s tangled up in ancient intrigue that can’t be ignored.”

Again this isn’t obviously foodie from the description (but look at the whisk on the cover!) but the gargoyle is a chef.

For more great recommendations of books featuring food (in ALL genres) check out the Foodies Read link up. A few one posts on the first of each month.