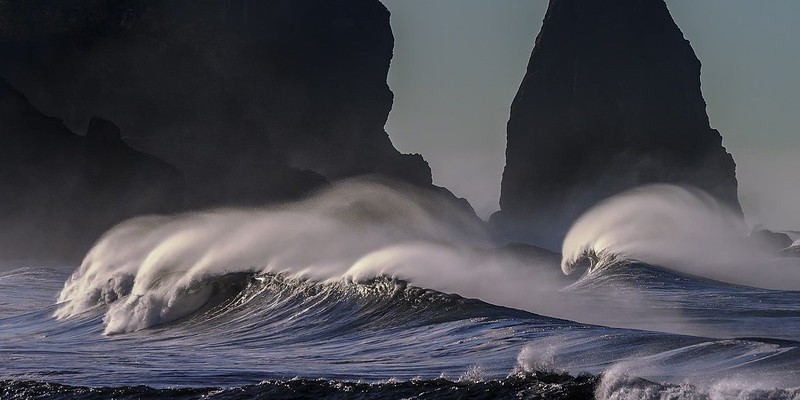 Fantasy Books Set Around the Sea

This series include Carousel Tides, Carousel Sun, and Carousel Seas by Sharon Lee.

“Carousel Tides pulls you into the chill foggy reality of peeling-paint sand-grit coastal Maine outside of tourist season and then hands you something else — the hidden world lurking in shadows or under the land’s surface or just offshore, where black dogs hunt the night and selkies toss unpleasant truths over their shoulders before diving into the next wave. In the center of this, Kate Archer tends and guards one of the spookiest carousels this side of Ray Bradbury and wonders what has happened to her grandmother. The old woman sent her a letter, left papers deeding over the carousel and old house and the Land (meaning much more than property), and vanished, telling the spirits of the land and sea that she expected to be back before the turning of the year.

Now March has come and gone and Kate must return from self-exile to take up powers and responsibilities she has renounced, or dying will be the least of her problems . . .”

I love this whole series.  I wish there were more books because I want to go back to this world.

This series is based around a magic shop on the Navy Pier in Chicago. There isn’t a lot of water involvement until the second book, The Sweetest Kind of Fate, when a Siren looks to be able to transform into a Mermaid in order to marry her Mermaid girlfriend.

Speaking of merpeople and sirens, there is A Song Below Water. The main character is a Siren and her cousin thinks that she is turning into a mermaid.

I love this series. I reread it often. I adore the magical system set up in this world. Everyone is attuned to an element. That’s my favorite kind of magical system. Their religion is awesome too. When they need guidance they go to a temple and pull three tokens from a barrel. Each one has a word printed on them to guide them. The series starts with Troubled Waters.

“Zoe Ardelay receives astonishing and unwelcome news: she has been chosen to become the king’s fifth wife. Forced to go to the royal city, she manages to slip away and hide on the shores of the mighty river.
It’s there that Zoe realizes she is a coru prime ruled by the elemental sign of water. She must return to the palace, not as an unwilling bride for the king, but a woman with power in her own right. But as Zoe unlocks more of the mysteries of her blood and the secrets of the royal family she must decide how to use her great power to rise above the deceptions and intrigue of the royal court.”